María Jesús Frigols is one of the authors of the 2008 award winning book ‘Uncovering CLIL’ published by Macmillan, Oxford. Having taught languages at secondary, vocational, and higher education, she has been involved with curricular development and teacher training since the 1980s. Since 2000, María has collaborated with an international team exploring ways in which to improve and upgrade education through CLIL. Since then, she has been involved with the development of good CLIL practice in Spain and through European Union initiatives, in a range of countries. María is currently in an advisory capacity at the Board of Education in Valencia, Spain. She acts in consultancy roles in the public and private sectors; is closely linked to the design and evaluation of European development work, and from 2007-2010 is expert coordinator of CLIL-CD in the 3rd medium programme of the European Centre for Modern Languages in Austria. 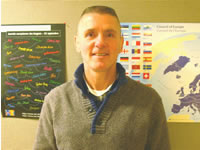 Kevin’s teaching career has spanned over 30 years and has found locations in the United States and Europe and has included working in primary, secondary and vocational education. He has taught a comprehensive curriculum working with diverse populations including those with developmental disabilities, learning disabilities, and the gifted. Working in Montessori and private and public education teaching specific subjects ie. English, Physical education. Biology, Science for Public Understanding, English as a second language and the International Baccalaureate Language B1 Higher Level and Language A2 Higher and Standard levels in English.

Since 2003, Kevin has orngaized and lead teacher training programmes and held workshops for both the European Platform in CLIL as well as courses for the International Baccalaureate (IB) Diploma, holding workshops in both Europe and the United States for the IB Organization since 2006,   Since 2005 Kevin has been a major contributor in developing and writing the new "Language A" course on Language and Literature for the International Baccalaureate.  These courses include Teacher Support Materials in the form of a web-based curriculum which includes lesson plans, materials and suggested texts so to aid teachers in delivering the courses to students world wide.  These courses started in 2011and foresee the first exams in 2013.  Kevin is currently involved in designing a digital textbook for both teachers and students in the IB Program.

Through his work with the European Platform Kevin has had ample opportunity to observe student- teacher interactions and how teachers and students subsequently choose materials to fulfil the curriculum.  This, along with the recognition that today’s students must manage complex language and cultural profiles, has motivated Kevin to develop methods and materials which ensure that students gain the communication skills and content knowledge required by today's work force. In fact, involvement with teacher training has provided Kevin an opportunity to oabserve classrooms in action and, while attending various CLIL workshops, Kevn has observed that learners are able to absorb and learn languages through a much wider variety input than what is usually offered through traditional forms of language-instruction: rather than approaching text as disjointed from the content, it is the content that determines and constructs the message of a text. This has prompted Kevin to become increasingly more interested in CLIL, first becoming involved in teacher-training programmes in Eichstaat Germany, sharing his belief that the development of language-based skills can only come through an interdisciplinary approach where content provides the motivation for meaning-making. This is the type of belief he has taking into his teacher training and the development of language-learning materials and methods for upper primary and secondary education.